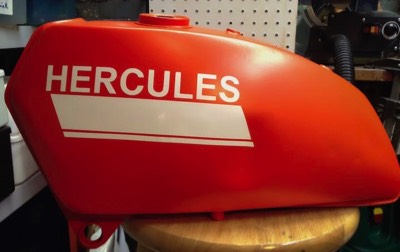 Next step in finishing the gas tank was adding the decals, after much procrastination.

First try was with some N.O.S. (New Old Stock) decals because I thought I would use the oldest set first, both for practice and because they were slightly yellowed. These were classic decals which needed to be placed in warm water and then transfered to the tank. They were nearly disintegrating upon removal fro the water, I tried to place them but they would not adhere to the tank and were shifting out of position with every small move. So they were discarded. I was expecting problems but hoping for the best.

These were from Reproduction Decals - no longer available. They were easier to handle than the N.O.S ones as they were between two pieces of paper, adhered to one, while the other was seperated and then ready for application. No water necessary except for a mist applied to the gas tank in order to allow some small placement moves.

These decals adhered more easily to the gas tank, still a lot of effort was needed to keep them from peeling off with the application paper but because the decal was vinyl, they were resistant to tearing or stretching as the N.O.S were. The biggest difficulty was with keeping the "S" straight and adhered to the tank, but after practice with the first side the second was easier.

The first side I did, the right side, I placed the decal too far forward, in my opinion, but it will be corrected on my next tank. I needed to trim the paper holding the decals better as that was part of my difficulty in getting the correct placement.

I can't complain, for my first try, I learned some things that will make the next better.

Instructions were to wait a minimum of 2 days before applying the clear coat and to use very light coats initially to prevent the decal from lifting. 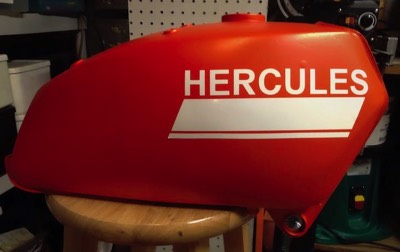