Watch out for the slippery leaves ...

I was looking forward to the first ride in the Pine Barrens Sunday. While I was preparing the 175 Suzuki PE for that first ride plus cleaning up and vacuuming the van I spotted a bald tire - a "good" spare I had put on when I had a flat and then gotten the flat fixed which became the "new" spare... But that first spare tire was a littlle worn out when I put it on and now I noticed there was virtually no tread left. Not wanting to make the long trip down south with that tire, I decided to replace it and that's when the trouble started! I was able to remove 4 of the 5 lug nuts after jacking up the van but no amount of force or penetrating oil would remove the final lug. I did have an impact wrench, but only had regular sockets not ones designed for use with the impact driver. In any case I tried with the plain sockets but it spun and slipped on the nut without removing it. So I again replaced all the nuts, ran to the local gas station/auto repair and asked Al, the owner, if he could loosen the one nut I had marked, with his impact driver and he did, and while I offered payment he said No Charge - and I returned to home base to replace the tire..... All lug nuts were easily removed now, and ... the tire would not come off - it was rusted on the axle. I could not get the wheel off even with my 5lb mallet. So, lug nuts back on, back to the garage, and Al was now at lunch! I waited. I knew he would be back because he had to lock up the garage although the attendant would be pumping gas until late... So, when Al returned from lunch, on his Harley Davidson.. I explained my problem and he jacked the van, got under with his big mallet, cursed once or twice and after the third 'thwack ' off it came... We took the good spare from the van, mounted it and when done I said "Now I have to pay you for replacing the wheel". But he said no again, no charge for a fellow biker!!! I really appreciated his help, and I decided I will be getting a complete set of impact bits for my wrench rather than getting them individually as I needed them, which is what I have been doing as I don't really use the impact wrench much, primarly I use it for disassembling the lower fork legs on my bikes as sometimes it is the only tool that will help with that job.

My next (minor) problem was Sunday morning and getting gas for my motorcycle on the way down to ride. I only wanted to bring 3 gallons in my 4 gallon can, so I had the empty gas can and enough oil measured to add to that volume making my 40:1 premix... When I got to the first gas station that morning, I asked that $12 of gas be put in the can, the attendant asked again what amount and I said $12, the amount that 3 gallons of Premium would cost. While standing and waiting for him to complete the process, the next thing he is asking me is if he can round up to $16. What? He had filled the can and now I didn't have enough oil for the correct premix.... OK, back to home base to get the correct amount of oil for the gas, a small agravation but at least I had not yet gone far.

The trip down to ride was mostly uneventful, until I stopped on Rt 70 for 2 turkeys standing in the road, and was waiting for them to cross the road but NO! Instead of proceeding they decided to attack my van, at least as much as 2 turkeys could possibly attack... I drove by them as I looked in my rear view mirror as another car approached and slowed,... wondering if they would also be attacked!

Upon arrival at our usual meeting spot I found my friend Mat helping Andrew do some repair on Andrew's handlebars. When they were finished after a while we went on a nice first ride, taking it easy with a relaxing mix of dirt roads through the forest and some favorite trails. I was glad it was an easy first ride as I'd pretty much suggested that was what I was hoping for after the long layoff due to Covid-19 and trying to respect suggestions to avoid unecessary travel...

It was a pleasure to have no problems on our trailride. Some photos by the lake of my PE, Mat's 250 Can-Am, and Andrew's Husqvarna that he recently bought. 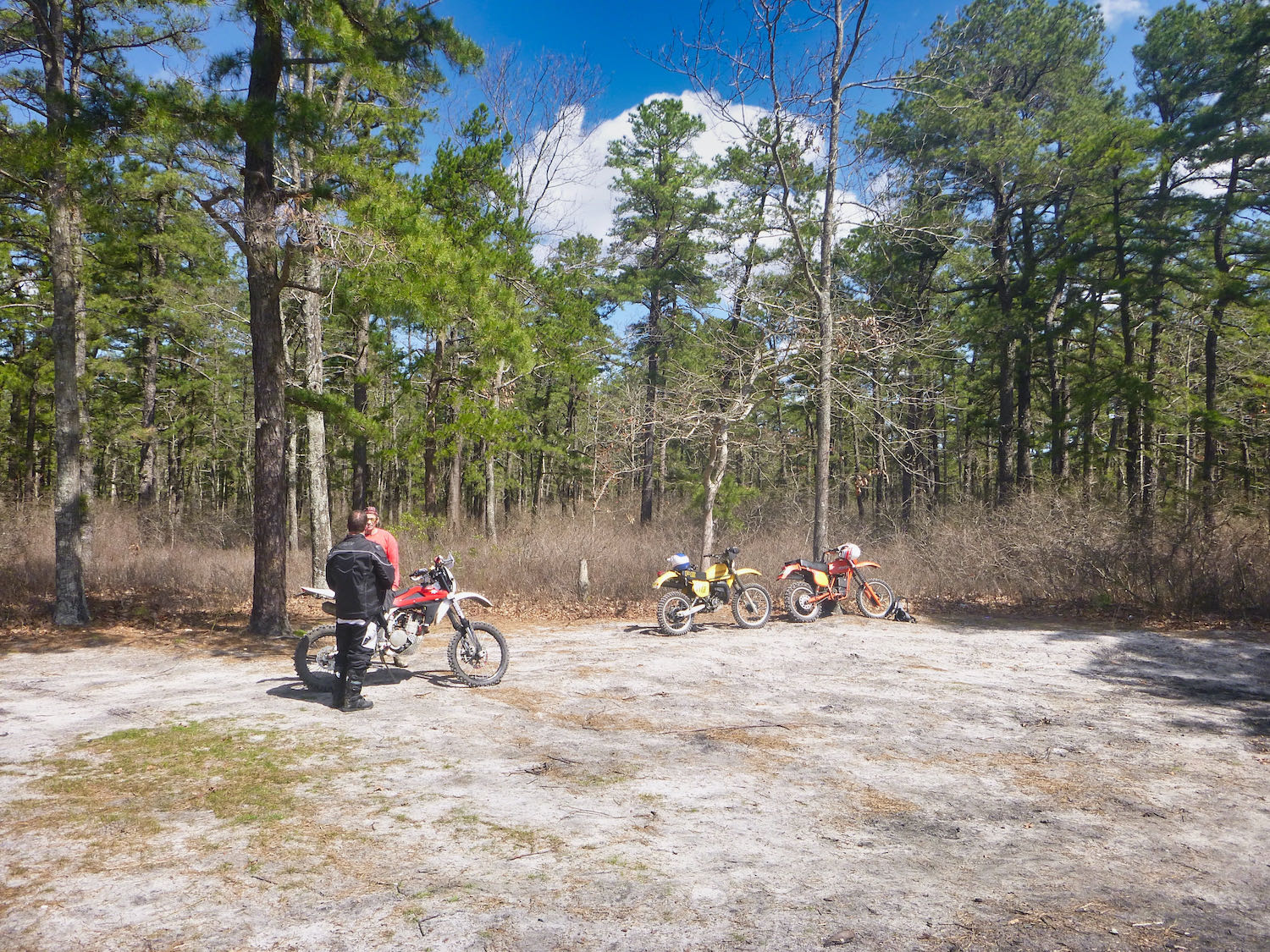 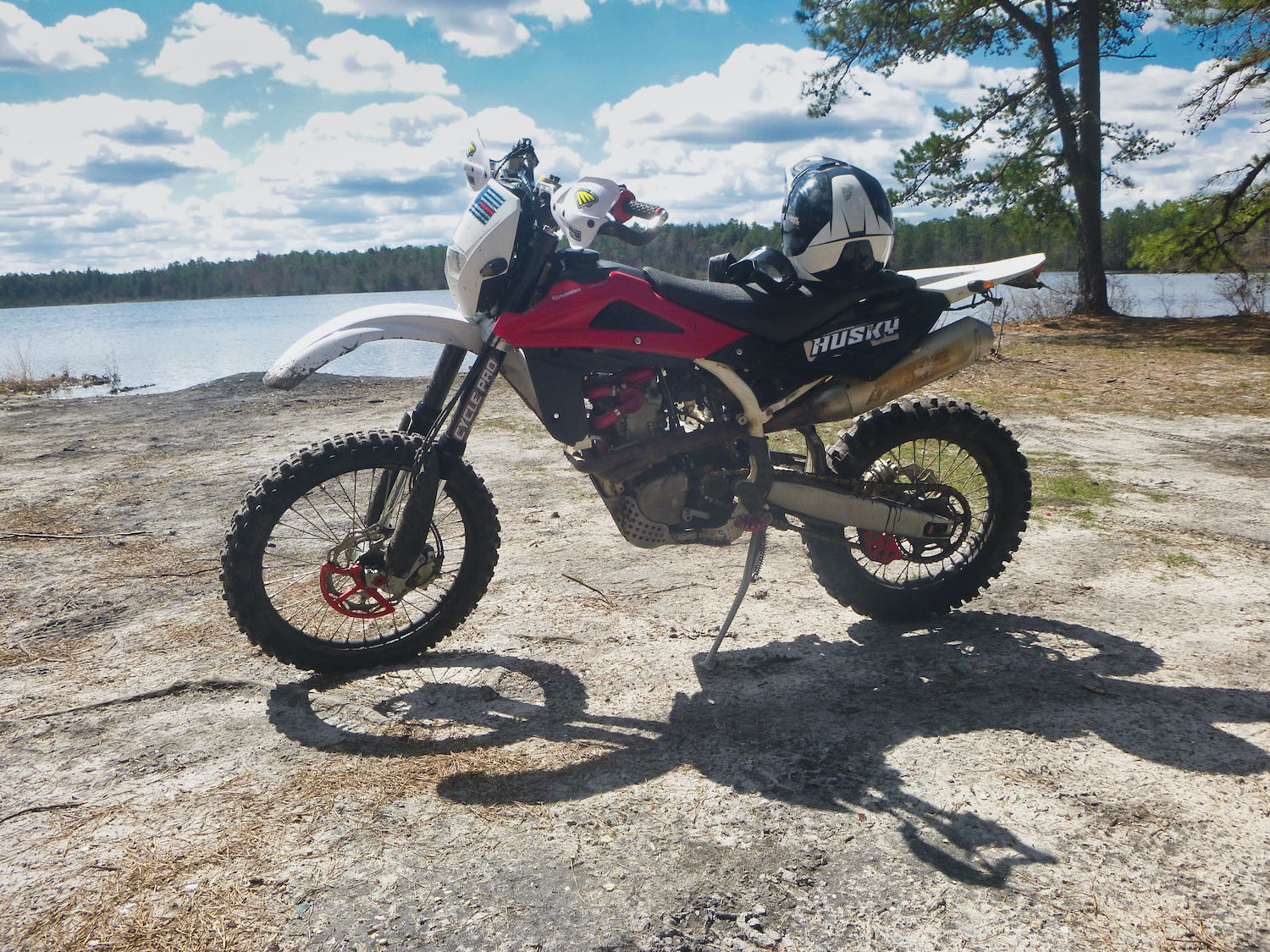